What do farming and energy efficiency have in common?

What do farming and energy efficiency have in common?

A lot of my summers as a kid were spent on my Aunt Nancy and Uncle Johnny s farm. Uncle Johnny was born on a farm, lived his life on his farm, and died on his farm. I guess you could call him a farmer.

The labor force on my Uncles farm was himself and his sister Aunt Nancy. The work was never done. There was always more to do. Sun up to sundown every day the same, get up, work till it’s time to go to bed, then get up the next morning and start all over again.

Years later when I came back from the Army, my mother and I visited the farm and I had a long visit with my uncle. He talked about his latest crops, beef prices, a couple of crops he thought might be a good idea next year, and the price of mohair… but giving a goat a haircut is a whole other story.

Thinking about how hard it was to work like he did, I had to ask him why he did it.  He seemed surprised that I would ask such a question. His reply was, “It is what I do.”

I was amazed, I explained to him. “You work so hard and for such long days. Frankly, I don’t know how you keep going sun up to sundown doing such difficult work.”

He laid it out to me real nice and slow. “Well, you have to pace yourself. Work steady, exert yourself when you have to, but never get in a hurry. Keep steady pace chore in and chore out… and always take a nap after dinner.” See back in those times in Texas, dinner was lunch and supper was what we currently refer to as dinner.

He continued on for a bit. ”It’s a good life boy. You get to watch things grow up and become something. Something like you. I had a little bit to do with you, and you have turned out ok.“

Well, I guess I have, and I hope people might see some of Uncle Johnny in me. I think he was a great example for me and a fine example of what America used to be. Small farmers working the land getting by on what they produced with their own hands.

I chose Air Conditioning as my career. I started TASCO Air a long time ago and through the ups and down of business it’s been very rewarding. Like a farmer, any business needs good seed to work with. My seed is the Trane line of comfort equipment. The years have shown me it has been a good choice.

With Ince Distributing my product is always available, as well as the support I need to take care of my customers. The quality and reliability of Trane lets me give my customers the best service I can offer… which I feel they deserve.

The idea of the TruComfort system made me think of my Uncle Johnny. The idea of an Air Conditioning System only working as hard as it has too, reacting to the current conditions, and exerting only the energy that the current need calls for is just like the way he explained how he maintained such a rigorous and demanding work schedule. Running longer but slower to deal better with the humidity, allowing us to set the t-stat three or four degrees higher, because it feels the same with the lower humidity, saving money by working smarter. Doing what it should at a pace that matches the need.

It’s a good idea Trane but Uncle Johnny had it first.

What we have to say 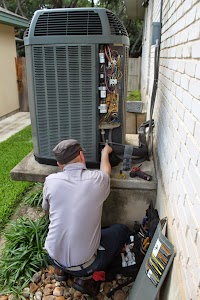 If you don’t find it above